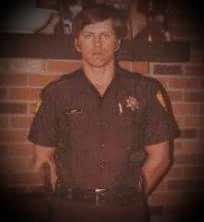 contact a driver leaving the scene of an accident.  On Saturday, October 16th at 2:13 a.m., Firestone Officers Eugene Whitcomb and Hart were patrolling near the intersection of Second Street and Jackson Ave. in Firestone when they heard the sounds of an auto accident.  Officer Whitcomb observed a ‘late model’ Chevrolet El Camino start to leave the scene so he activated his lights and stopped the El Camino.  Officer Hart, in the passenger seat of the patrol car, immediately exited and approached the driver’s side of the El Camino just as the car started to leave the scene a second time.  Officer Hart appeared to reach into the vehicle to grab the keys but was thrown to the ground as the El Camino accelerated and ‘sped away’.  Officer Whitcomb radioed for help and went to assist Officer Hart who was bleeding heavily from the left ear.  Paramedics from Northern Colorado Medical Center and Tri-Area Ambulance responded and called for the Air Life helicopter from Greeley.  Hart was then flown to Swedish Memorial Hospital in Englewood.

Firestone Marshal Tony Onorato and Weld County deputies responded to search for the El Camino and the driver.  Nearly 2 hours later the suspect was located a mile north of Firestone  hiding in the weeds about 100’ from where he left the El Camino.  The suspect was identified as Bernie Wayne Jacobs, 39, of Evanston.  Jacobs was transported to the Weld County jail where he was booked on suspicion of Drunk Driving and Vehicular Assault.  Jacobs bond was set at $2,000 and he bonded out later that day after he paid a Denver bail bondsman $200.

A spokeswoman at Swedish Hospital reported on Monday that ‘flow scans’ on Hart showed no brain activity for 48 hours so the family had the life support systems disconnected.  Officer Richard Hart was pronounced dead from massive head injuries at 1:35 p.m.

Weld County District Attorney Stan Peek requested a bond of $50,000 as part of the Vehicular Homicide arrest warrant for Jacobs.  The high bond request was due to “the seriousness of the offense and his terrible driving record” Peek said.  Jacobs had three drunk-driving convictions and had just had his driver’s license suspended for five years on September 1st.  The results of the blood alcohol test came back and Jacobs registered more than a .20 percent alcohol in his blood (twice the legal limit).  Despite a search by many officers in several states, Bernie Jacobs could not be located.  Charges of driving under revocation and being a habitual traffic offender were added.  Bernie Jacobs failed to show for his November 3, 1982 arraignment in court and warrants were issued for his arrest by Weld County SO and the FBI.

Richard E. Hart grew up in the Midwest, was drafted into the army in 1967, and served in Vietnam.  He was a military policeman attached to an artillery battery.  After leaving the military he went to work for the Duncan, Oklahoma Police Department, near his last military post at Fort Sill, OK.  After 6 years he moved to Colorado (c1976) where he got a job driving a tank truck for Koch Oil Company.  Hart had been a part-time officer for the Firestone Police Department for 6 months, usually working night shifts on weekends.  He was survived by his wife Brenda, son Danny, 5, and stepson Michael, 9.  Danny was born with a birth defect, Treachers-Collins Syndrome.  Services were held on Thursday, October 21st at St. William the Abbot Catholic Church with burial at Hillside Cemetery in Fort Lupton.  More than 100 officers from 30 law enforcement agencies attended to honor Officer Hart.

On Saturday, December 11, 1982 the city of Firestone designated a special day for Richard Hart.  ‘Heart to Hart’ day included a parade, hot air balloons, an auction, a dance and a luncheon at the Frederick firehouse.  Money raised was added to the earlier funds raised to allow Danny to get his necessary surgeries.  Total funds raised at that time totaled over $21,000.  Danny Hart had six surgeries in the next 4 years.

The mystery of what happened to Bernie Jacobs was solved when his body was found on April 29, 1987 on a riverbank near Weber Reservoir in Lyons, County Nevada.  He had committed suicide three or four days earlier, with a .38 caliber revolver gunshot to the chest.  He left a note but made no mention of the killing of Officer Hart.  He had been a fugitive for over 4 ½ years.  Brenda Hart stated that “she didn’t like the idea of anybody committing suicide”, but added, “it would save the family the emotional turmoil of going through a court trial.”  “I’m glad that he’s been found and it’s over with,” Brenda Hart said.